A swarm at a wedding 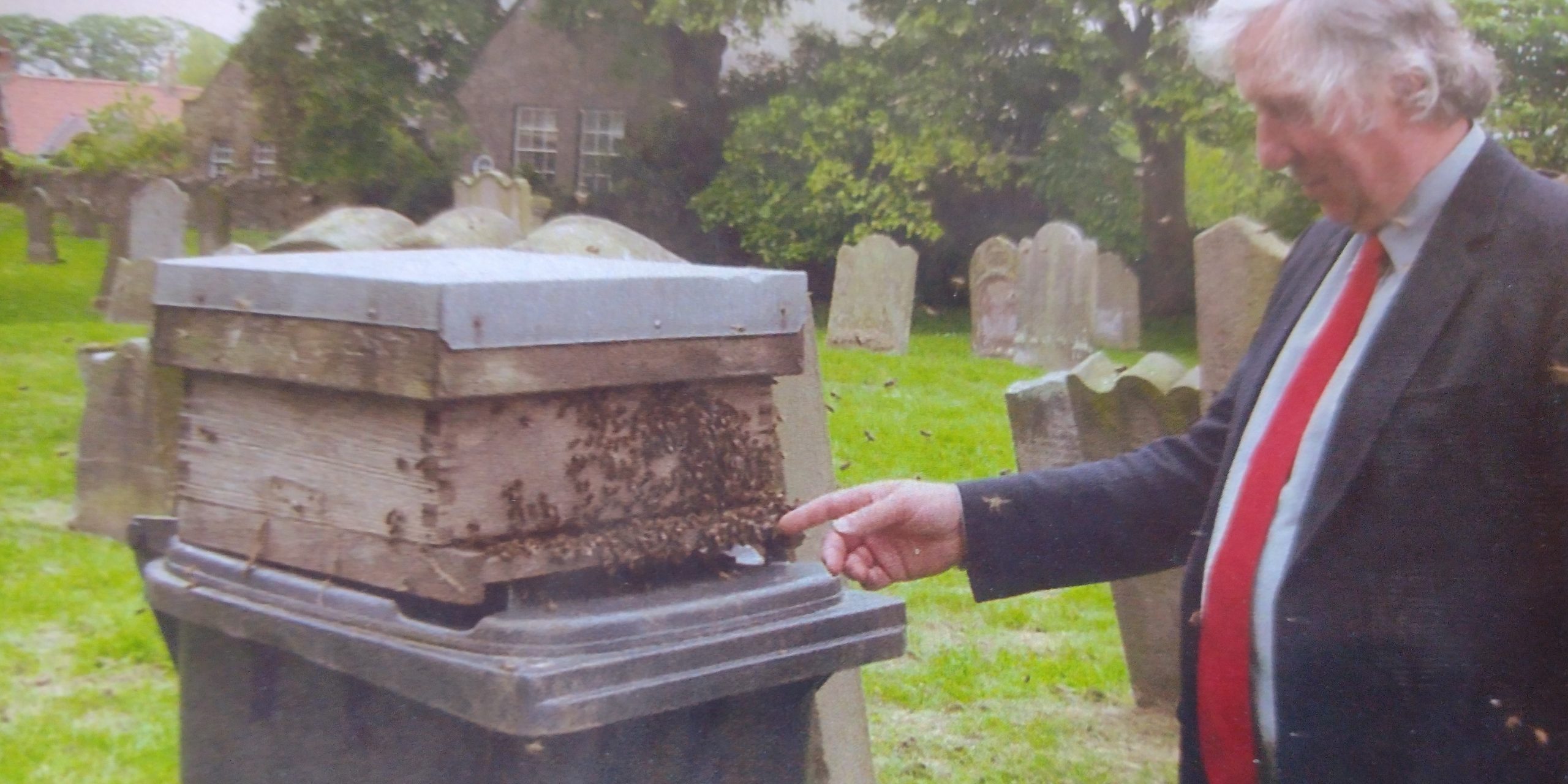 We went to a wedding knowing that a swarm of bees was hanging high up on the 11th century church.  I left the empty hive on a dustbin and, when we came out, they had taken up residence.

The swarm would be hanging on the church because the ‘scouts’ would have identified a place to start a new home and when they got there it was not apparent where the entrance was.  When I put the hive on the dustbin the ‘scouts’ would be relieved to find it and bring all the ‘repletes’ in.

A swarm will only leave their parent colony if there is an imbalance within the colony. I.e. too many young bees being born and not enough work for them.  The colony of honeybees then becomes ‘smitten with the bug’ as they enter a predetermined ‘state’ where they make preparations to swarm.

The young bees, for whom there is insufficient work, fill themselves up with honey and they stay in the hive (colony) so they are unable to orientate on the present site.  This is so that when they fly with their queen to their new home a mile or two away so they cannot find their way back to the parent hive.  They are known as repletes.

They are guided to their new home, in this case the church roof, by older bees called scouts.  These older bees emit a pheromone to which the bees are attracted so they know where they are going.  The pheromone consists of geraniol, nerolic and geranic acids and citral and is emitted from the Nasonov gland within the abdomen of the adult bees.  The queen emits a substance (another pheromone) called 9-Hydroxy-2-enoic acid which holds them all together as a group (the swarm).  Additionally, the scouts, when they have found the entrance to a good home, fan their wings making a loud noise which indicates pleasure and contentment.  The swarm is then shepherded to the correct location by a mixture of pheromones and sound, otherwise they would get hopelessly lost.  They carry enough food with them in their honey sacs to tide them over for a fortnight as an insurance against bad weather.  They are not aggressive or defensive at this time, far from it.  This is extremely sophisticated behaviour.

Swarming is the reproduction of the colony in order to cover new ground (expansion) as well as replace colonies that have died out in the winter.  A honeybee colony is corporate i.e., they function as a single individual.  This is about decision making within the colony.  Decisions have to be made every day which must involve intelligence as well as instinct.

The viruses that are affecting honeybees now are causing honeybees to lose their instincts to some degree. Agricultural chemicals may or may not be involved.  I cannot say for certain. Consequently, swarming is greatly reduced and colony numbers are greatly reduced.

If indigenous bees were not looked after by beekeepers, they would die out altogether.  Pest control officers in North Northumberland tell me that the incidence of honeybee swarms has gone down by 90% in the last 20 years.  This is a dire situation and was never the case in the past.  My Father said if the bees were swarming, ‘’All was well in the world’’ and that was fifty years ago.  He was right, swarming was a cause for celebration both for the bees and the beekeeper.  Not everyone saw it that way.