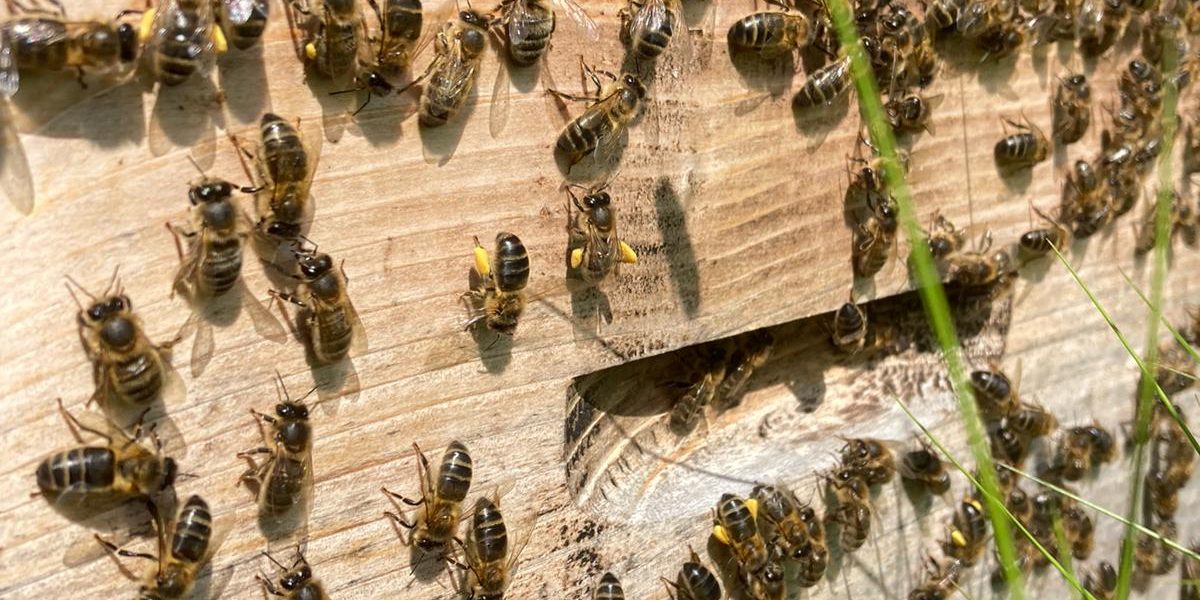 I am surprised to learn that a small sample of our black bees have shown themselves to be 90-94% Apis mellifera mellifera as a result of genetic analysis undertaken by Dr Mark Barnett of Beebytes Analytics CIC.

During the 1950’s very many Italian queens were imported into this country and so it was very normal to see bees with yellow stripes among colonies of black bees.  Since then, there have been imports from very many countries into an area with a cool climate (the Eastern Borders).

Traditionally our black bees superseded at the heather when the old queen was 3 years old.  I believe that the indigenous queens and drones will come out in poor weather and get mated right beside the hives because it is the only way that they will survive another year.

Crossbreeds/imports will be reluctant to come out at such low temperatures and thus their genes are eliminated over a long time (we know this because the yellow colours have disappeared from them). Thus, the black bees become inbred but not to the extent of being useless, far from it.  I would hazard a guess that the black colour is to absorb sunlight on a cold Spring day when pollen is needed in the hive.  Thrift is to get through the bad times without starving and to keep a manageable broodnest.  Fifty years ago, there were many feral colonies some in hives but mostly in the trees.  They would be 100%  A. m.m. but very different in characteristic to a domesticated black bee being good pollinators but useless for honey production.  Beekeepers, ourselves included, did struggle with them because of swarming and general negativity.  Brother Adam would not think much of them, but they would have some useful genes.  Scientists in Austria predicted, before varroa arrived, that true ferals would be the only bees to survive varroa unaided.  They were right to a degree.

True ferals or ‘wild’ honeybees are smaller and sometimes hairy (throwback) and keep a small broodnest.  The queen cells are numerous and tiny and often built horizontally and hidden.  A domesticated colony will build queen cells that are proud and vertical.  Feral bees will move across the face of the comb in waves to get away from the light and the queen will hide.  A good black bee will sit patiently on the face of the comb unless they have had too much smoke.  These are useful indicators.

Progressive beekeepers would select the best of the ferals and work away until they had a good commercial strain of their own.  WW Smith of Peebles was perhaps the most notable.  Imports were not necessary.  However, the grass is often greener, and imports were brought in and the resulting out crosses sometimes became unmanageable (aggression).  Beekeepers can build a strong relationship with their own black bees over time with sympathetic management to the extent that should the beekeeper pass away, the bees will deteriorate very soon afterwards.  No-one will take them over and be as successful.

I should say that black bees will not tolerate rough handling without becoming habitually defensive.  This gets them a bad name.  Colonies of black bees within an apiary will all be at different stages and will work as individuals (drifting).  They are often suffering from chalk brood.  This could be due to malnutrition.  They are otherwise tolerant (partially resistant) to most other diseases but not modern viruses.

I have tried to describe all the variations of a black bee that might be found under the general description of an indigenous black bee.  Ideally, they need to belong to an individual with ability.  Real ferals certainly do not belong to anyone.  When defining black bees these distinctions are important.

Trees and the Honey Bee
19th January 2022
Cart
Product Search
All Departments
Go to Top
Subscribe to our Newsletter!
Join our mailing list.
SUBSCRIBE
I agree with the terms and conditions
We will never spam you, unsubscribe anytime.
We use cookies to ensure that we give you the best experience on our website. If you continue to use this site we will assume that you are happy with it.OkRead more