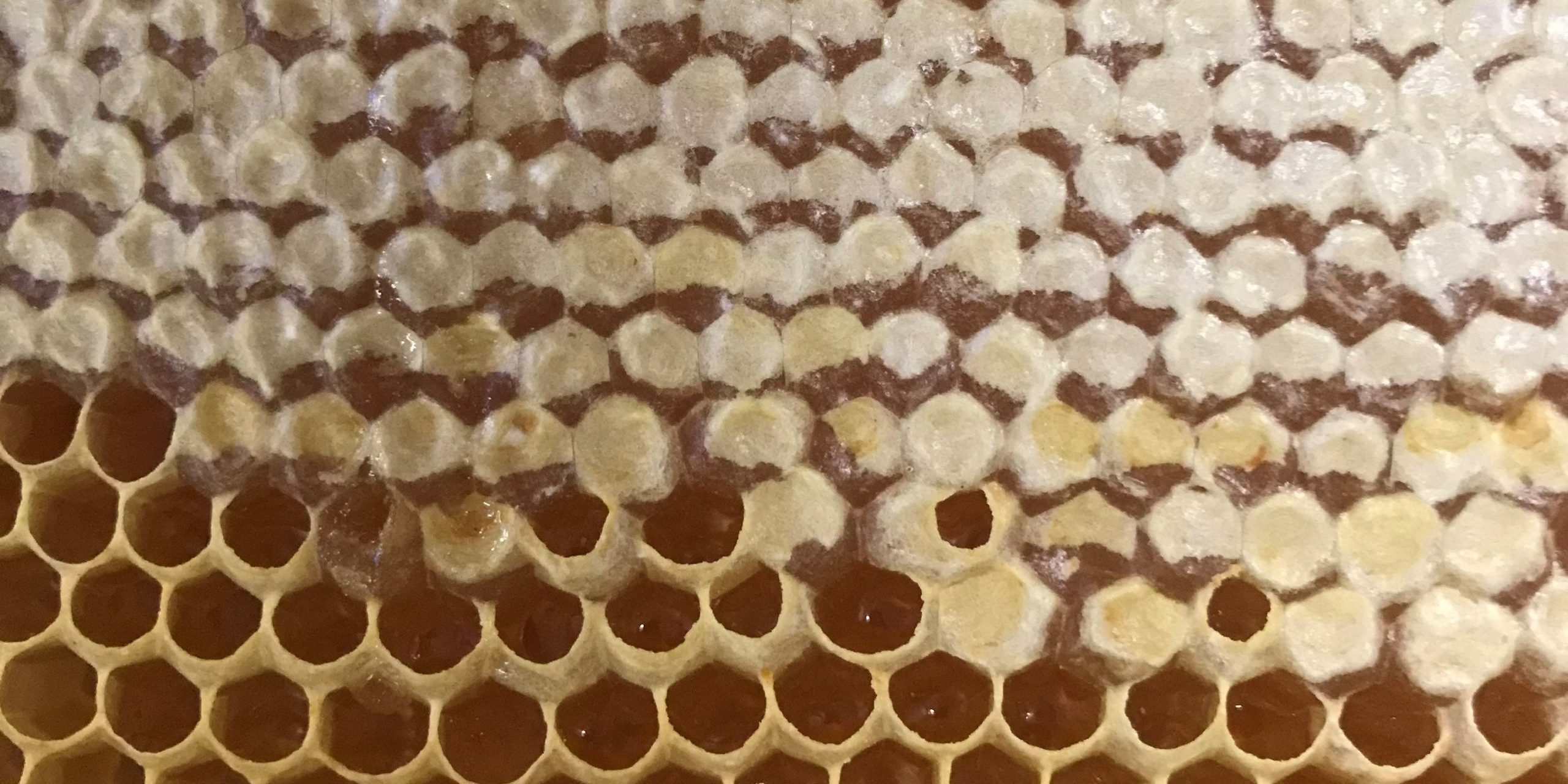 Honeycomb is made of beeswax.  Beeswax is made by young bees from the nectar of flowers.  Generally they make it during hot weather in the Summer when there is a ‘honeyflow’ and nectar is being secreted by flowers.  The wax is kneaded into honeycomb which is then used to store the honey which is being produced at the same time.  Six sided cells are made that interlock, each cell wall is also the wall of the adjoining cell.  Similarly, the bases of the cells are interlocked with other cells that face the opposite direction to form a ‘comb’.  The cells are inclined at 15° up from the horizontal so that surface tension prevents the honey from running out of the cell.  The surface tension depends on the viscosity of the honey which in turn depends on the moisture content which has to be below 18 %.  When the moisture content is below 18% naturally occurring yeasts are unable to live because honey is hygroscopic and draws moisture out of living organisms (including bacteria which of course makes it an ideal dressing for wounds).  Thus, the honey in the cells cannot ferment so it will keep for years and provide the bees with food for many Winters.

Honey is very heavy, half as heavy again as water.  Beeswax is very light and yet a few ounces of beeswax can support many pounds of honey because of the structure of the honeycomb.  Honeycombs are built about 1½ inches apart and are separated by a ‘bee space’ which is always the same allowing the passage of a bee (less than ⅜inch).  This measurement never varies; indeed, all the measurements and geometry are invariably correct showing that the bees have mastered the technology necessary to construct a very strong honey comb out of very little material.  They also understand the principle of surface tension and the importance of low moisture content in the honey.  They are super sophisticated.  They have mastered all this ‘technology’ thousands of years before man.

Honey comb is also used by the bees to store pollen (protein) and as a nursey for young bees (pupae).

Bees store pollen in the honeycomb.  Pollination is about bees visiting flowers to gather pollen to feed their young principally, as well as themselves.  They provide a vital service to plants by transferring pollen from the anther in a flower to the stigma in another flower, often some distance away, thus achieving fertilisation and ultimately seed that will be the start of a new generation of plants.  Some plants are self-pollinating and others, like grasses, are wind pollinating.  The pollen collected by bees is the protein part of their diet and is carried in a basket (corbicula) on their hind legs.  Honey bees will make great efforts to collect pollen long before Spring in order to give the young grubs the very best nutrition.  They have been seen to pollinate Christmas roses when no other insects are around.  If the temperature is above 6°C and the sun is out they will go.  Experts tell us that there are more efficient pollinators than honey bees but they forget that honey bees are reliable pollinators 12 months of the year because they do not hibernate.  There are always one or two bees on the outside of the cluster that can detect intruders as well as pollen at a considerable distance away.  Thus, they provide a vital service to plants early in the year and throughout the year.  There would be no almonds if it were not for honey bees.

Bees use honeycomb to rear their young (brood).  The brood area is always at the centre of the hive where it can be kept warm in sub-zero temperatures.  May 2021 saw 21 nights of frost which must have put a great strain on honeybees trying to keep their brood warm.

During the Summer honey bees live about 6 weeks with their duties divided into housework (honey bees collect propolis from the trees as a resin containing bioflavonoids.  They polish the honeycomb with it particularly in areas where the young are reared in order to ‘sterilize’ the environment within the hive and prevent growth of bacteria.  The interior of a hive is ‘spotless’), tending to the brood and finally foraging for water, pollen and nectar (honey).  There might be 50 000 individuals in a hive, and they are all replaced within 6 weeks.  Vast amounts of food have to be brought in to build all these bodies and to accumulate enough honey to see them through the Winter.

During the Winter the worker bees need to live for 6 months or maybe 7 depending on the Spring.  They change their physiological state to sit out the bad weather without hibernating.  A few bees will always be active.  The varroa mite which has plagued our bees for 20 years (and worldwide bees for 40 years) has introduced viruses into the colonies which have affected the bee’s ability to prepare for the Winter.  They then suffer from ‘reduced life expectancy’ and perish in the late Winter.

Varroa can be controlled to some degree by the use of hard chemicals, but we use organic treatments (oxalic acid and thymol).  Beehives already contain too many chemicals associated with intensive agriculture without putting any more in.  Keeping bees has become very difficult much more so than when I started 60 years ago.