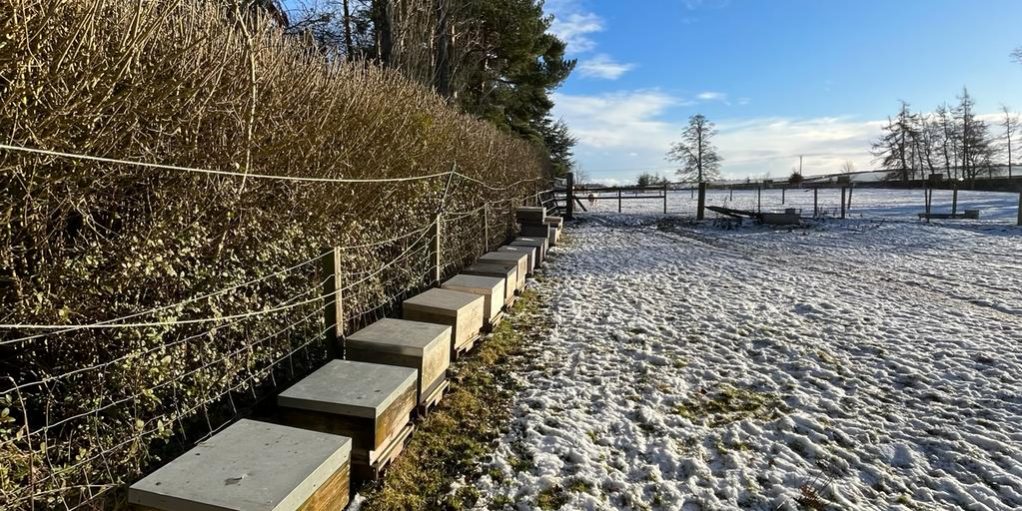 In response to an enquiry from Eire regarding overwintering of honeybee colonies (30% year on year winter losses).

A good way to minimize winter losses is to get the hives into sites that are totally suitable.  It is important that the fronts of the hives are exposed to the winter sun all day and that there are no intervening trees or bushes that might weaken the rays of sun.  The hives should be backed up against a wall which runs east to west  otherwise a thick hedge where the ground to the south of the hedge or the wall is always bone dry (the lee).  Hives could be 6 inches of the ground but not more.

If there might be a problem with the prevailing wind sweeping along the front of the hives then old pallets could be fixed in an L shape to break the wind. So that the colonies are in a tranquil environment.  The prevailing wind will also knock down many older bees returning to the hives after collecting pollen, particularly if a cloud comes across and hides the sun.  There are many months of the year when bees are working at the limit of their endurance  (6 – 10C) in the North and other less favourable places in the UK.  Therefore, it is very important that pollen is available close by.  Village gardens are the best place otherwise wooded areas and well away from big stretches of arable land.

Winter losses, in the less favourable areas of the country, were generally caused by ‘dwindling’.  The old overwintered bees were dying before they could be replaced by young bees given that the hive has to be kept warm at all times and especially through the night when there is no solar gain.  This situation causes the queen to stop laying which of course brings further problems at a later date because continuity has been lost.  Presently if the queen stops laying eggs, she may not resume egg laying at all because of viruses associated with varroa.  Then the colony if finished. So, if the sites are not good enough to protect the old bees and keep the queen laying losses will occur.  This is a physical problem made worse by an underlying virus problem leading to low morale and hopelessness.  In the days before varroa we often came across tiny colonies that were headed by young queens that had been reared by supersedure at the heather and had failed to build up enough mature bees to carry them through a long winter.  This we remedied by switching those tiny colonies with a big prosperous colony during a heavy honey flow throwing some baby powder into each hive to create a degree of confusion.  This would prevent the big colony from swarming and the little one would be right for the heather.  We would not do this now because of changed circumstances and lack of confidence on our part.

I went to a farm down the Northumberland coast where they would like some bees and the lady in the house thought that the perishing cold east wind from the sea would make beekeeping difficult.  I agreed.  When I went outside I noticed a young tree that was bent away from the north west wind indicating that the wind from that direction was the prevailing wind and that it was persistent and cold preventing that tree from pointing skywards (phototropism).  Any beekeeper looking around for a site would do well to look at half grown trees and see where the wind was coming from that was the most persistent.

During 2022 the north wind did not lie down until the 12th June and in 2021 there were 21 mornings of frost during the month of May.  In order to keep colony numbers up we must make nuclei during June in order for them to progress into some better weather.  Queens that are mated in early July will have access to plenty of mature drones which is good.

I notice there is often a 10C difference between the north and the south on weather maps.  There is global warming because we see the greater wax moth getting started but beekeeping in the north is controlled by winds from Greenland through to the Steppes and that will never change.  Therefore, the winter sites need to be perfect.