Trees and the Honey Bee 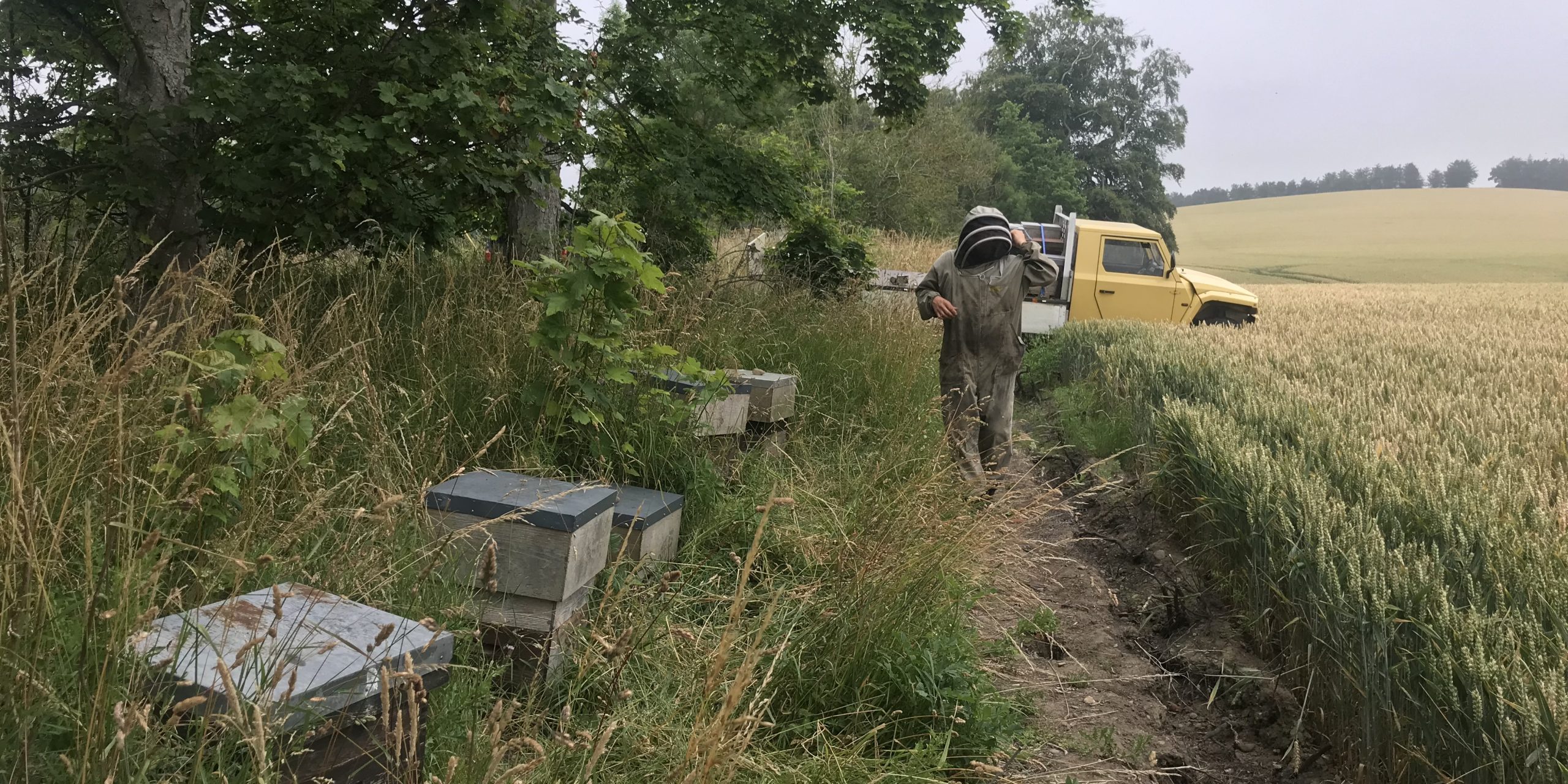 I was thinking the other day about the sycamore tree and the other trees that will soon be flowering.  There are already tassels laden with pollen on some of the willows and the alder will also provide plenty of pollen.  Much more prominent in the landscape will be the blackthorn (sloe) in March and the gean (wild cherry) in April.  There must be blackthorn bushes grown commercially because shop shelves are laden with sloe gin.  During a warm spell in April, bees will get some surplus from all the different varieties of “prunus” but generally the honey will be used in brood rearing.

In days gone by, we all waited for the sycamore to flower in the hope of a crop.  All too often harsh winds blew the tassels off before the bees could get going.  However, if there was a period of settled weather thereafter, the bees could get a respectable crop of sycamore honey from the “extra floral nectaries”.  This was delectable honey of a greenish red colour (engine oil) and always of show quality.  There were woods in the Lothians that contained many mature sycamores that might provide a reliable honey crop.  When oilseed rape appeared in the early 70’s that was the end of sycamore honey in the East unfortunately.  Rape honey was easy for the bees to collect.

We are told by those who know better that the sycamore tree is a weed and should not be planted.  I remember that some years ago timber merchants were scouring the countryside for the trunks of sycamores, particularly those that were rippled, the rippling within the growth rings being caused by unrelenting pressure from the prevailing wind.  One thousand pounds was being offered for a suitable tree that would be exported to Germany to make furniture.  There we have the sycamore, a tree that will provide nectar and sustenance for many insects and that in turn will provide food for birds.  We have noticed that when a cold East wind blows in from the coast in mid-summer, many swallows will be flying in the lee of sycamores to feed on insects that have been dislodged, a bonus for the swallows on a bad day.

I realize that I have forgotten about the elm that flowered profusely before the leaves appeared.  Passers-by would remark that there must be a swarm of bees in an elm tree in March because there was so much activity.  We rarely see an elm tree now and soon all the ash will have disappeared.

The next crop to look forward to was the hawthorn (May blossom) that flowered for 10 days only.  All the hedges in Northumberland were 20ft high mature hawthorns, providing shelter for cattle.  Bees might get a super of highly aromatic medium colour honey, one year in ten.  These hedges were grubbed out to make way for cereals using government money.

Lime trees are grown in avenues attached to big houses and provide some nectar in most years and occasionally a good amount.  Limes flower at a time when bees are consolidating rather than rearing brood.  There is a lot of lime honey produced in the West of Scotland and there are many different varieties of limes.

Lastly, we must mention Thuja plicata (Red Cedar) that provides ideal timber for beehives.  We know about Red Cedar from Canada but not so many know about Thuja grown in this country because it is not so readily available, being grown as an amenity tree rather than in plantations.  The British tree provides coarser timber but stronger and always dimensionally stable and good for a fine finish.  It is exceptionally resistant to decay provided the sap wood is not used and very light, perfect for beehives.  We have used many tons, bought the trees, dried the wood and made hives that will last a generation or more.

Reading through this it is easy to see that ‘loss of habitat’ is very real.  A small oak wood was felled near an apiary a year or two back.  Fair enough but I thought about the number of (rare) birds using that wood and all the insects specific to oak woods and multiply that by decades and think about the loss in terms of habitat.

Honeybees will visit oak trees, beech as well, in the spring maybe, but much more likely in August where they will gather “honeydew” which may be seen at honey shows in the very dark classes!!

Paul Robeson sang a song entitled “Trees”.  The tune will be familiar to many of our senior generation…that includes me!

Honeycomb
31st January 2022
Cart
Product Search
All Departments
Go to Top
Subscribe to our Newsletter!
Join our mailing list.
SUBSCRIBE
I agree with the terms and conditions
We will never spam you, unsubscribe anytime.
We use cookies to ensure that we give you the best experience on our website. If you continue to use this site we will assume that you are happy with it.OkRead more